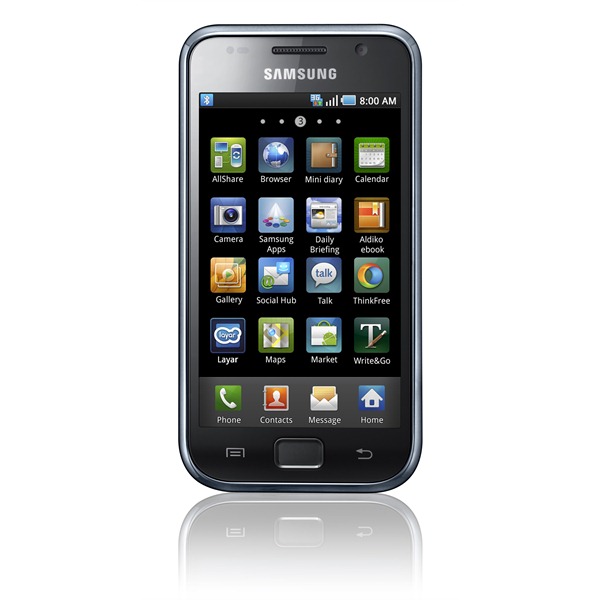 Yes, I know that I said that I’m waiting for the Galaxy S II. But things that happened today that just kinda warrants me to get this.

The situation was this, my mum renewing her plan. So she has a couple of choices, and the thing is, the available phones that isn’t too ex are lousier than my phone. And, my dad’s plan also up for renewal, but he don’t need a new phone cause his workplace don’t allow phones with cameras.

I guess that we all win! (except my dad). My mum got my phone which is still in tip-top condition and still owning all those $0 phones. So yeah, I’m really pleased with this phone. The super amoled display is really (Y). 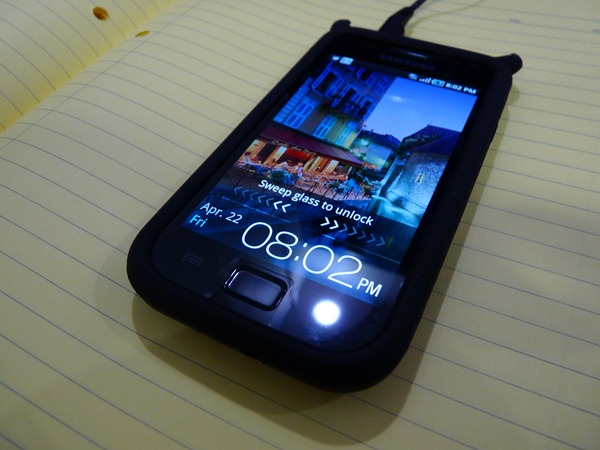 Yeah, screen cover and protection straight up. I’m planning to trade in this phone when the S II comes out. Assuming that this phone is worth about 300, I’ll probably need to pay… An extra 2~300 when the new one comes out. But obviously, I plan to wait awhile for the prices to drop before I change to S II. It may be a couple of months, even a year after it drops, but yeah I think I can survive with this for the moment.

And AT LAST, I get an android device for me to fuck around with. Ohhhh I can’t wait to do all the things that I wanted to do to a device like this ^^

This is a good Friday indeed.

Well. I’ve gotten sick of the previous theme. Not that it wasn’t good. It’s just that there isn’t much that I can change. What do you think about this new theme? The thing that I think that is the most significant is that the default font size has increased, I always thought that the previous theme’s fonts were just a tad too small.

So either way. I created a new header to welcome you guys into the blog!

So yeah, it’ll be great if you can give me a little feedback on this theme. I’m thinking quite seriously about hosting a proper website and stop relying on wordpress’s servers. Haven’t decided yet though, it’s kind of a hassle and it costs a little. Though having a .com blog seems way cooler.

Also, I finally completed a little script. It’s… Pretty basic. I mean, it’s something that can’t be executed unless I get physical access to your computer. I’m… So gonna screw my classmates over when school reopens tomorrow.

So, if you (my classmate) happen to read this, then good for you, cause you’ll know what’s gonna happen. (then which I probably won’t do it to you)

Basically, it’s a combination between basic DOS instructions with AutoHotKey script. I will do the wallpaper prank, which will create a new folder. If you click on it, it will launch the dos script, which will activate the hotkey script. The dos will cause your computer to shut down in 5mins, displaying this wonderful error. 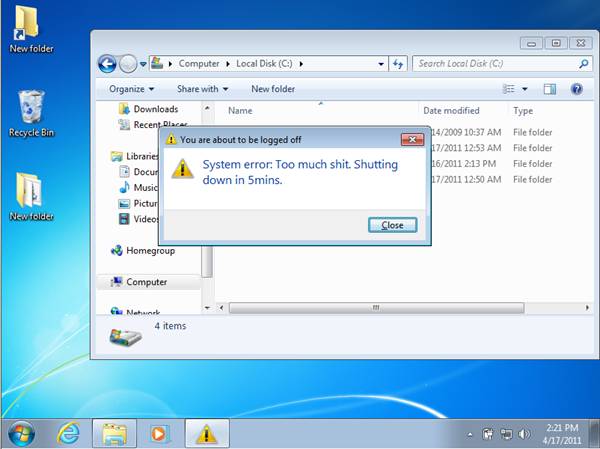 The hotkey script will cause you to not be able to use your windows, enter, left/right click and other keys. Once it’s executed, it will then delete itself to prevent you from screwing with other people for no reason (:

It took me awhile to finish it, but heck I’m proud of it. Though my bro’s reaction was like “… You’ve got too much time”

This shall be a 3AM rant.

I’ll most definitely be sleeping after this. Damn I must get my body clock back to normal. Need to register for my elective modules are 12 tomorrow. I know I know it’s not very late and yes it isn’t crazy to wake up at that time. But there’s always this slight chance that i’ll oversleep and miss the golden chance. (then i might not get the one i want)

So anyway, I think that school starts next week. Before that there’s a couple of things I wanna buy.

First, a new school bag. A backpack. I’m sick of carrying my laptop by hand. Since I’m going to carry an extra battery to school and all. And that I’ve been using this crumpler for like, 4 years? I don’t know. So bored of it.

Also, I’ll need a new jacket! Again, sick of the ones I have. So yes, shopping of some sort along the way. So anyone?

I’m still waiting for the phone to come out, and I might consider saving up to get a little netbook. Damn so many things that I want, too little money. Oh, on the side note I’m drawing Ulquiorra. Almost done, just a couple of finishing touches and I’ll be done.

Oh, the japanese song that I posted yesterday? I learnt how to sing it already. Can’t remember the lyrics though. And yes I know I’m just ranting about all the random stuffs. These are the kind of things that you don’t bother telling your friends because it’s pointless. That’s why there’s twitter and facebook. So that people can respond to your random words and strike out a conversation out of bullshit.

Ah. After a few hours of rest I’m feeling so much better. Though my body clock is totally screwed. And I’m still aching from everywhere. Thanks to all the cycling, bad sleeping posture and ultimately, the game of twister.

So, I’ve taken about 500 pictures in the past 3 days. Along with some videos. Which add up to a whopping 10.8GB in total!

So here’s an attempt to recall all the action that happened.

END_OF_DOCUMENT_TOKEN_TO_BE_REPLACED

After 4 days of slogging at work, it’s finally time for some rest. Though I’m not really that tired already lah. Kind of got used to it.

First day, before the start of the fair. The Canon booth that I’m working at. 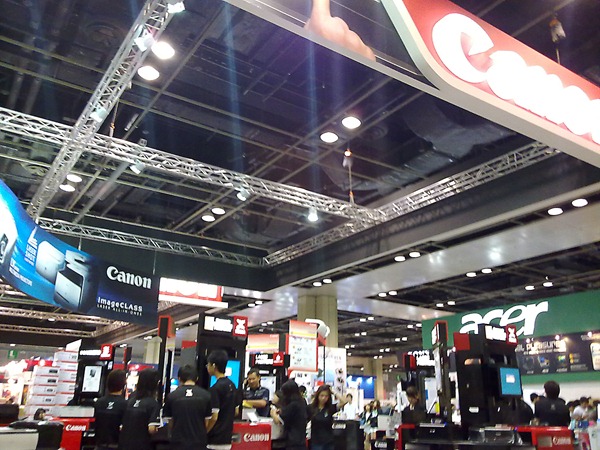 END_OF_DOCUMENT_TOKEN_TO_BE_REPLACED

Okay uh, as I’ve said I’m currently working and the hours are a little long I guess! So I’m bloody tired when I get back. I’ll try my best to post some stuffs up before I leave for work. Like right now. so yes. Hopefully I can squeeze some time out tomorrow morning to do this as well.

Anyway, come visit me at the Canon booth if you have the time!

Currently at Suntec Convention Hall, level 4, the entrance, all the way at the left (:

So… Basically, time to sum up what I’ve been doing.

Um. Currently playing a new game called IrisOnline. My IGN is Victoriquee. Yes it’s a female, cause it’s a anime/manga style MMORPG and it doesn’t make sense for me to create a guy.

And oh, I’ll be working for the up coming IT show. Uh, currently I’m working for Canon under Challenger. So… If you’re buying printers come and fine me! :D  (or just for the fun of it)

And uhhh. Gonna bowl/badminton tomorrow. Can’t wait for it! 😀

Probably going to attempt my colour drawing later on. And I feel like I’m missing something but I can’t remember what.

Anyway, a weird situation happened today. So basically I went  for the briefing for the job. And uh, at the end of it I was wondering if we could go grab dinner.  So people present as follows.

I realized that the situation would be too awkward and I left instead. I am POSITIVE that it is the right move to make.

Alright probably off to draw or MAYBE more posts?